10:16AM my phone buzzes. It’s the Embr app. As a Respondr, I make my money by taking jobs through the app. People think we’re like a private fire service, but so few of them read the terms and conditions properly. Luckily I sleep in my customised truck, so I’m ready to roll in an instant.

10:19AM I arrive at the client’s domicile and chop my way through the front door. Yep, that’s a fire alright. On the far side of the room a middle aged man is running in circles screaming. I use my hose to clear a path through the fire towards them. “Oh, thank gods you’re here, please you have to save us, there’s me, my husband, our 2 children and my mother-in-law in the house.” he sobs, clinging to my plaid shirt. This shouldn’t be too difficult. I’m only contracted to rescue 4 of them and the house isn’t that big, or on fire.

“Sir, I need you to calm down and tell me if you have any valuables in the property. Any stacks of cash or high value items.” I ask, but he just goes back to screaming about his family and the fire. 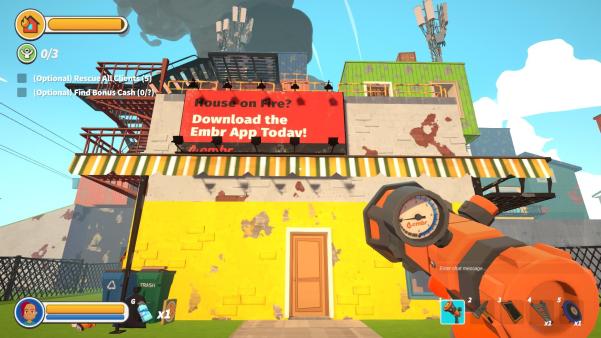 In an upstairs bathroom I find the husband. He’s sitting on the toilet, looking a little sheepish. He’s surprisingly calm considering he’s sitting not 3 feet from the inferno that was once his shower unit. “Well, I hope you wiped already.” I think to myself as I hoist him over my shoulder and head for the nearest window, which I smash with my axe. Taking a moment to estimate the distance to the designated safe zone, I yeet him out the window.

Turns out I miscalculated and he landed a good 1 foot short. My bad. I take out my ladder and carefully descend, before collecting up the husband again and carrying him the last foot to safety.

Returning to the house I find a teenage girl in an upstairs hallway. The passage is a raging inferno, but she’s too focused on her phone. Hopefully she’s tech savvy enough to give me a full 5 flame review when this is over. I start to hose down the walls and floor but I failed to notice and electrical socket. As such, I’ve just swapped fire for a more shocking problem since the floor is now a different kind of death trap. Thinking fast, I look along the cable from the socket and flick the switch off. 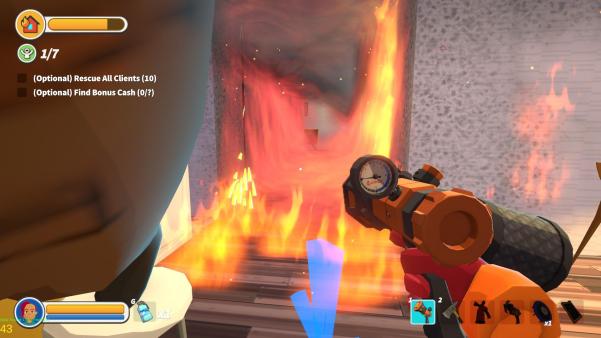 The teen hasn’t even noticed so I rush her to the window and leave her there while I drop down a trampoline. Once it’s deployed I grab her again and hurl us both out. It’s a little bouncy, but I get us both to the safe zone without any broken bones this time.

In through the front door again, I see that, despite the fact I made a safe path through the fire on my way in, the client didn’t bother leaving the house himself. In the meantime, the main support beams for the floor above have fallen meaning I have to chop my way through to get him out.

Next up is the basement. Getting through the fire on the stairs isn’t an issue as the stairs have collapsed. I throw down a water grenade to clear most of the flames before deploying my ladder and descending safely. Floating ominously in a doorway is a cloud of green gas. Luckily there’s a nearby standing fan which someone left on and I use it to push the gas away from my entrance.

Jackpot! There in the corner is the family safe. There’s another kid sitting on top of it, but they can be moved. Unfortunately, it’s an electrical locking mechanism. Tossing the kid aside, I spray some water between the safe’s exposed cable and a wall socket. Then I just have to turn on the power and voila, the safe pops open. Come to momma you beautiful green stacks. There must be $100k here. I grab the cash, leaving the whining teen behind for now. There’s definitely going to be a bonus for my for rescuing all this dough. I carefully take my precious cargo out to the safe zone and place it tenderly within, on one of the comfier looking mattresses. Don’t worry friend, I’ll be back to count you later.

I allow myself a moment to think about the new grappling hook I’ll be buying with my cut of that before strolling back in. The fire is much bigger now and the basement is completely engulfed. Guess, junior isn’t getting rescued today. I retrieve my ladder and take it around to the back of the house to gain access to the balcony. 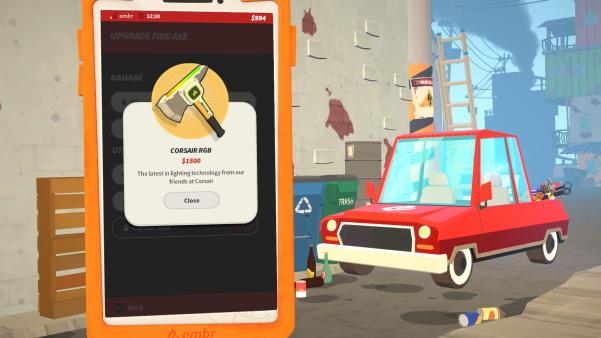 Score, there’s the mother-in-law. She seems completely unaware of the situation so I squirt her with my hose to knock her down before she accuses me of trespassing and carry her to safety.

“That’s me done sir, please be sure to leave a favourable review on the app.” I say cheerily to the client.

“But my house is still on fire!” he screams at me over the sound of the approaching Appbulance.

“I’m just here to fulfil the contract, which I’ve done. Have a good day, and stay safe sir.”

I’m barely back in my truck when the app buzzes again. A restaurant on the other side of town. Guess I’d better Crab n’ Go check it out.

Embr is out now on early access and available through Steam. It’s highly playable in it’s current state and hugely improved over the version I played last year at CoxCon. I’d highly recommend anyone play it, it’s loads of fun, especially in multiplayer. Just don’t think too hard about the premise of a private fire and rescue service.