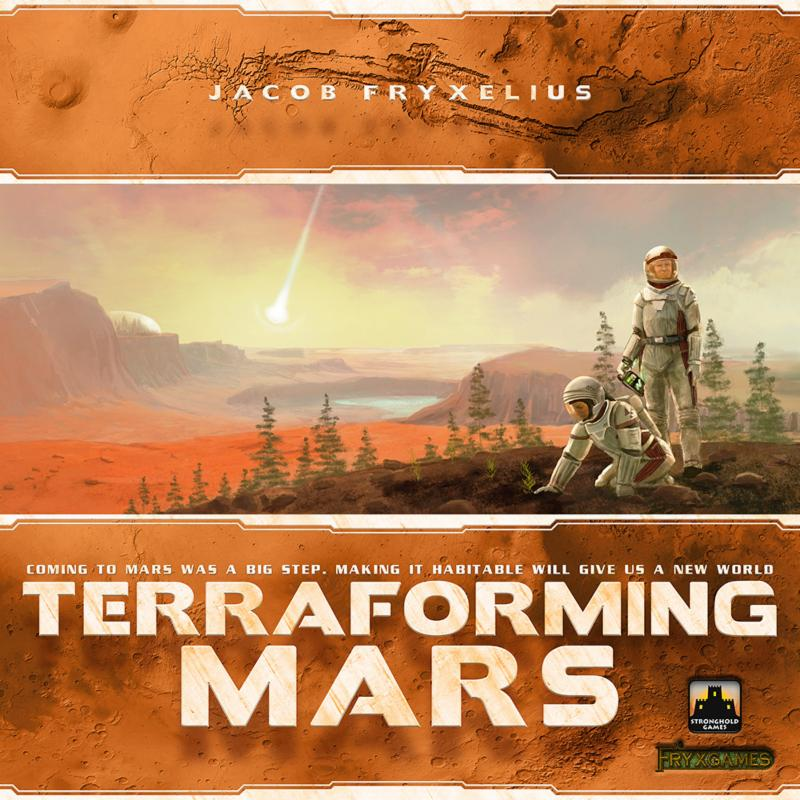 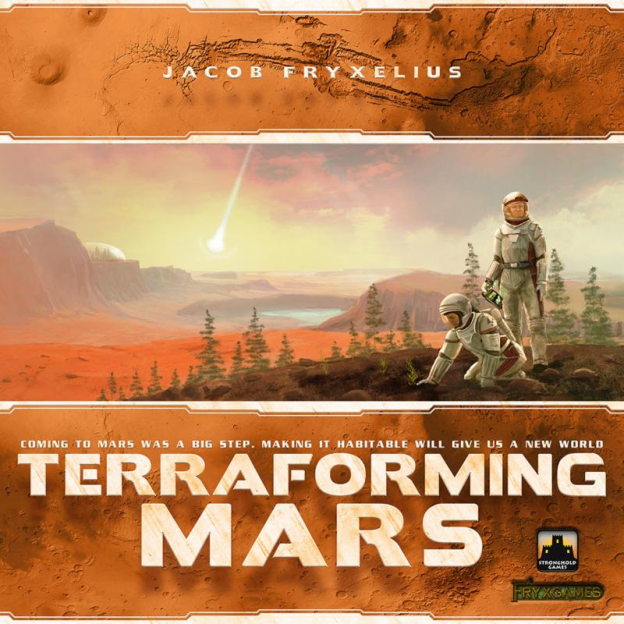 Lately I’ve been craving some more heavy weight boardgames. Much as I love a game we can knock out in 30-60 minutes, I’ve been wanting something more in depth. Having looked around for recommendations, I’ve been pointed in the direction of Terraforming Mars by Jacob Fryxelius.

Huge corporations are sending people off to Mars, in the hope of bringing warmth, water, and a breathable atmosphere. So this is your chance to get in on the dusty, red, ground floor.

The first thing you’ll probably notice about Terraforming Mars, is the sheer number of cubes. There’s 5 bags of cubes in each player colour, some chonky white cubes, and then bags of gold, silver, and bronze cubes to use as money. Next up is the massive number of cards and the art thereupon.

The card art for this game is an amazing and alarming mix. It’s like someone just used google images and hoped for the best. It’s mix of what looks like stock photographs and… interesting art. Ultimately it does the job, but there’s no real consistency through the deck. Additionally, the print on the cards is a little fuzzy and the card stock is flimsy. This is another game that feels like it needs to be immediately sleeved or risk it melting on a particularly humid day. As so much focus goes on the cards throughout the game it really feels like a poor choice to have put so little care into the finished product. 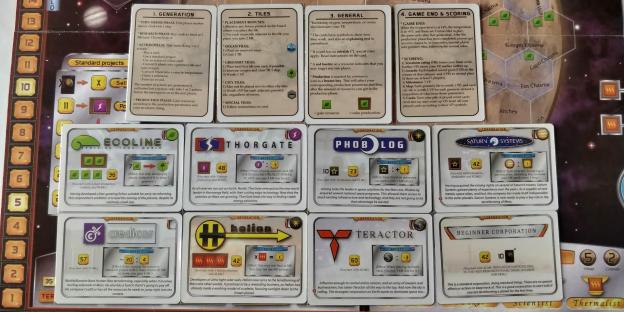 You’ll start your martian adventure by dealing out two corporations to each player, they then pick one and this will determine their starting funds and any ongoing bonus they may get throughout the game. Alternatively, new players can pick a beginner corporation which gets a set starting amount, but has no other bonuses during the game. These basic corps can be played with the standard ones, so no worries if you’re introducing a new player to a group of veterans.

Next up you’ll be getting some of those cards I mentioned earlier, beginners get 10 cards for free, normal corporations will get 10 to choose from, but will have to pay 3 credits (they’re called mega Euros, but that’s a bit wordy) for each card they wish to keep. Once everyone’s made their decisions about their starting hand, play can begin.

Each player huddles over their own resource board, here they carefully monitor their income and supplies of various commodities such as money, steel, titanium, plants, energy, and heat. These boards take up a lot of focus, but once again, the quality of the components really let things down. They’re shiny rectangles of cardboard, which you constantly place and remove various cubes on throughout play. Keeping the income tracking in place is vital, but one sharp knock on the table and it could all get shifted around. Unless everyone has a good memory, you could be looking at basically calling game over. 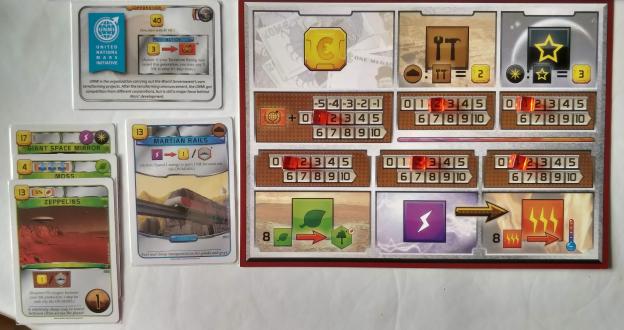 If you look online, people have made various solutions, from phone apps, to perspex overlays, but none of these are really satisfactory. What’s needed is a little bit more love on the components, to give us something more akin to the Scythe player boards, those little divots are perfect, and stop things going completely tits up if, 2 hours in your friend accidently kicks the table while getting up to answer the door to destiny (bloody destiny, always calling at inappropriate moments).

Players may take one or two actions, be that playing cards from their hands, paying for various actions shown on the main board itself, using special actions on already played cards, using their unique corporation actions, etc. As you can see, there’s a lot to do on your turn, lots to think about. Is now the time to start building cities, or do you want to focus on raising your titanium income, so you can afford more space projects? What if you wanted to start cranking out power, which you can turn into heat and ultimately start raising your terraforming rating by warming the planet? 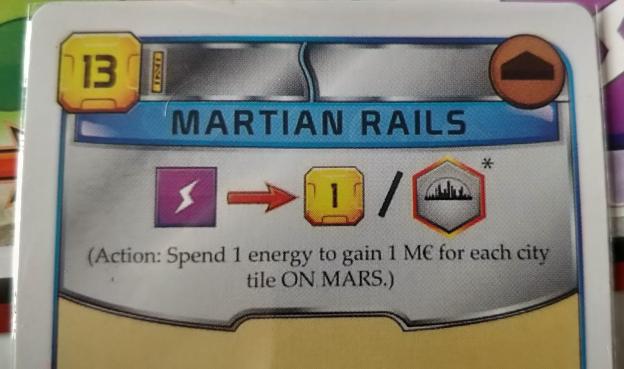 Ultimately, your goal as a group is to raise the temperature of the planet to a balmy 8 degrees, increase the level of oxygen in the atmosphere, and to create 9 glorious tiles of ocean. Once these challenges are completed, the game ends.

On an individual level though, you’ll want to make sure that you’re raising your own base score (in the form of a terraforming rating, usually raised by building oceans and forests) and to lock in victory points, which are calculated at the end of the game. Victory points are mostly found on the cards you play, but there’s also the opportunity to claim awards (Do you have a bunch of cards in your hand? Have you completed enough building projects? Have you build 3 cities?). While there are 6 different awards that can be funded (for the knock down price of just 8 credits), players can only fund 3 of these during the game. Once they’re gone, they’re gone and with them a further 5 victory points in the end game, so get them while they’re here (FOMO! FOMO! FOMO! Bend yourself to capitalism! Do iiiiiiit!) 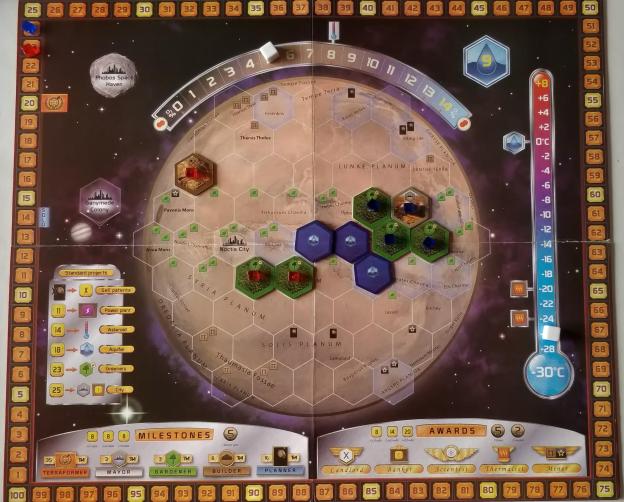 Gameplay can last up to about 3 and a half hours for a couple of first timers, but settles down to 90-120 thereafter. Terraforming Mars is deep enough and thoughtful enough to keep you engaged during that time, without risking boredom and gameplay moves fairly swiftly (as long as everyone is paying attention). While I absolutely love the gameplay and just want to keep diving back in (and maybe investing in some expansions), I really wish the components (particularly the player boards (flimsy and potentially a game ending risk), the cards (flimsy) and cubes (which aren’t well finished)) had enjoyed been better made. It’s natural to wonder where your £50-£60 is going when you look in the box, my only conclusion is that it’s licencing for the art, but still, that poor quality has lowered my final score. If you see it on sale, definitely grab yourself a copy.