Townsmen by HandyGames is a medieval city builder that looks like it used to be a browser game. *is nudged by assistant with papers* Ah, I’m being informed it’s a mobile game too. Meh, I can see how that would be a thing. Oh, and the earliest trailer I can find for it is in 2012. So Nintendo thought, ‘how do we want the world to think of our awesome hybrid system and it’s storefront? Well made, new games, maybe a few ports of much beloved titles? Or just emptying Neo-Geo titles older than the average Switch owner, some of our endlessly rereleased NES “classics”, with just a dash of Sudoku, Picross, and 6 year old mobile titles, scattered like chocolate chips through the puddle of vomit one might spew after eating 3 packs of cookies and drinking a litre of apple juice, while baked like a badly made cup of tea?’

The game is slow as hell, and I now wonder if this isn’t deliberate and part of some microtransaction aspect. ‘How slow is it?’ I hear you ask, from the future, after I’ve written and uploaded this review. Well, future reader, I started the tutorial and have been drudging through it for over five hours. Sure, it could be trying to streamline directly into the main game, but it’s hard to tell, and I’m not going to email them to ask.

You start the game (tutorial) as a disgraced Lord, on the run from the royal court after some money went missing, and set yourself up as governor of a rural township. You learn – painfully slowly – how to assign people to tasks, build basic buildings, how stockpiles work, and all the usual stuff that Stronghold did much better, 11 years prior to this bubbling up. As it’s early game, you’ll find many building options locked off, until you progress, but only in the manner you are told. If you work out that you’ll need a baker once the mill is built – because the main mission is to supply the town with food – you’ll have to wait until the mill is built and the miller has ground enough wheat before you can even think about marking the mission complete and being permitted to build a bakery. If you’re making a tutorial this simple, you could at least speed up build times for it. Otherwise, it’s just a waiting game. 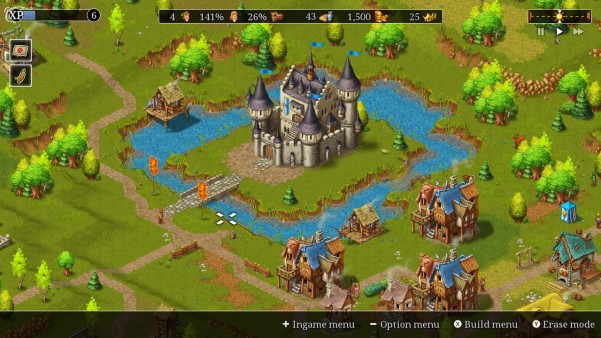 While there is much waiting at this time, there is another peril. Your buildings will start to fall into disrepair. So if you leave the game in high speed for slightly too long while trying to skip build time, or work time, you could find an important building will be unusable. Plus, thanks to the rigidity of the tutorial, even if you work out the building you need to make in order to repair that other building, it will be locked until you’re given permission. So… start over, I guess.

As you progress, you can unlock research projects. These will open up things like new units or the ability to upgrade certain actions/buildings. Some of these upgrades will be permenant, while others will only last for the current map. It’s not totally clear which is which from the menu, which is super considerate.

What really confused me was that the section marked ‘tutorial’, under ‘new game’ shows 6 missions total, the last two of which are labelled ‘hard’… but… but why?! It’s a tutorial. Aren’t you just supposed to show me the mechanics so I can get on with the actual game? No? I guess I should just get goode then huh, my liege?

Once you’ve finished the long, boring, and apparently hard mode tutorial, there’s 26 scenario missions and 24 sandbox levels with sizes and difficulties ranging from small and easy to huge and hard (a point I only bring up so that I can write huge and hard, and then let my brain write the penis jokes – this is the most enjoyment the game has managed to provide me with). None of that really matters because I was bored to shite long before I’d seen more than a couple of those. Well done, you got paid and then annoyed me out of any possible value in your game *golf clap*. 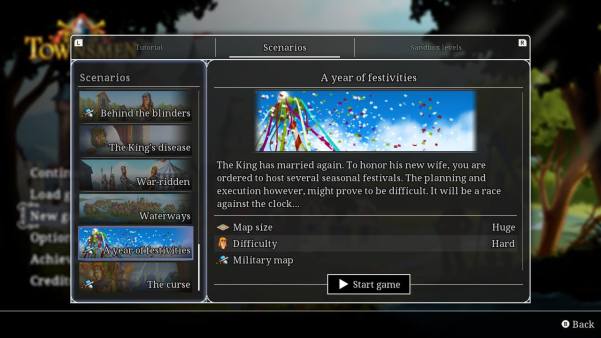 I got so bored with Townsmen I actually went back and finished Starlink. Now, much like the game itself, I’m bored of talking about it, so here’s the usual end bits.