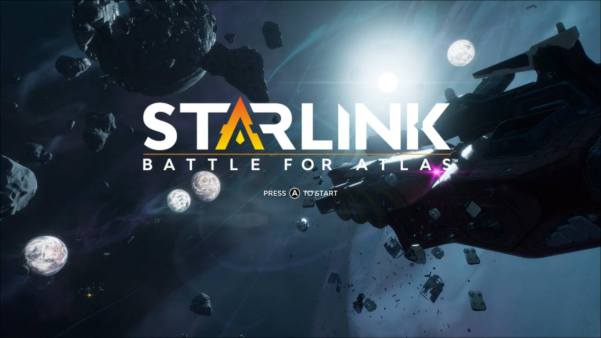 I’ve had the chance to sit down with Starlink: Battle for Atlas over the last week or so. It’s the latest toys-to-life game from Ubisoft. This time we’re avoiding big name characters and franchises (bar Starfox if you’re playing on Switch), the building fun of Lego Dimensions, or the whatever the heck Skylanders was about and going into the one place that was previously thought to remain uncorrupted by capitalism.

I was lucky(?) enough to get to play with the physical release on Switch, which comes with a rather nice Arwing model with detachable wings, a couple of weapons (one fire based, one ice), a Fox McCloud pilot figure, another pilot (who I’ve spent so little time playing as, I have no idea what his name is (ok, I looked it up, he’s called Mason. Happy now?)), and a stand to attach it all to my joycons. There’s a poster in there too, but who cares. Want game now! In addition to this, there’s digital versions of a third weapon (kinetic type) and the standard ship that comes in the other format physical editions.

I’ve probably dumped around 20 hours into this so far. Lots of buzzing over planets claiming every ruin, enjoying the beautiful and varied biomes & wildlife, destroying enemy extractors (think fracking/mining if it made clouds of evil that corrupt local fauna… so, fracking), building up a whole host of mining and observation facility-running friends by completing basic tasks (allowing me to get regular cash deliveries and see more of the planets I visit respectively), and crushing the wonders (world bosses).

I’ve been struck how much Starfox content there is in the game, making me feel kinda bad for people on other systems. There’s cutscenes, and bonus missions to be had. PS4 and XB1 players will miss out on this, but I suppose they can rub themselves down with slightly better graphics to feel better, if that’s their bag.

On the subject of missing out, I come to my main problem with the game. As mentioned earlier, the physical version comes with two physical weapons, covering fire and ice elements, plus a digital weapon that’s kinetic. As far as I’ve seen, kinetic weapons can’t open anything particularly special, they just do non-elemental damage. However, elemental weapons do act as keys for specific doors/chests. At this point, I ask myself: “do I miss whatever this is and move on, or buy more bits to unlock it?” and looking at my cool Arwing model and go, “this is yet more plastic tat that will sit on my shelf after a week and never be looked at again, meanwhile, the actual game I want to play is gating content”. Often, you will find canisters with the required element that you can throw at these elemental locks, but sometimes you have to go well out of your way to find the right one. 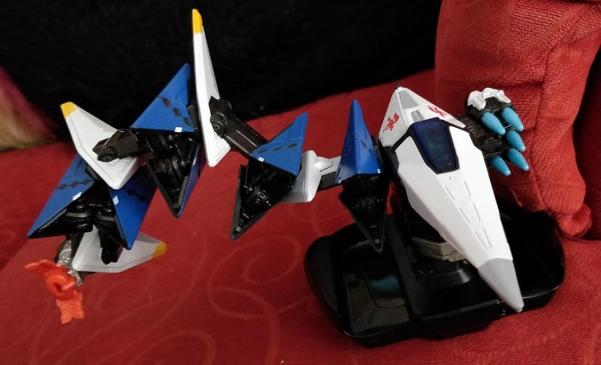 See, the thing is, once you’ve got the game going, you don’t actually need the models attached to the controller, as you can just use the menu to change them digitally. This takes unnecessary weight off and makes long term play more comfortable. As such, after the initial hour or so of “hey, this is fun to take the wings off on the fly, or attach them all on one side and make the ship really wonky” turns into “ah, that enemy is resistant to cold damage, I’ll hit the menu and swap that out as I don’t own the third weapon physically anyway”.

“So what about the digital version”, I hear the imagined voices in my head cry, because I imagined them crying that.

I’ll tell you. The digital edition includes the game + 4 ships, 6 pilots, and 12 weapons. Add to that the Switch version includes the exclusive ship, pilot, and missions. All this for slightly less than a physical version. Those weapons cover all elemental options, meaning you can unlock (as far as I can tell) every elemental door/chest and easily find a weakness for every elemental enemy without the need for additional purchases. Furthermore, additional ships will act as extra lives, meaning you can respawn immediately, rather than back at a prospector/observatory.

Throughout the game, there are upgrades you can make to your mothership. These include adding additional mod slots to your ships and weapons, the ability to fuse low level mods into the next level up, extra space in your inventory for collected items, etc. At first progress is nice and steady, but before long you’ll notice the bottom three categories can’t be unlocked with the pilots you have available in the physical edition (and, I understand you need at least two extra pilots with the digital edition). Right now, I can’t tell if these are really important to the game, but I feel it’s important to let you know where you’ll need to spend extra monies.

Right now, ship packs – containing one ship, a pilot and a weapon – will set you back £24.99 for physical editions and £9.99 for digital. Then there’s pilots, which are sold individually for £6.99 physical and £4.99 digital. Lastly, there’s weapons in two packs which go for £9.99 physically and only £3.29 on the eshop. I have no idea where they got these prices, but it feels like they just drew numbers out of a hat.

I get that it’s a toys-to-life game. I get they want to make fat cash off of these toys, but when you’re skint like me, the value from the physical game feels greatly lessened when I start finding bits I just can’t do, because I was wowed by a plastic Arwing.

As far as I can see, someone buying the physical edition of the game will need at least two extra weapons (gravity and levitation based) and 2-3 extra pilots to unlock everything. I’ve tried to work out what the smallest amount of extra stuff I’d need to buy to see what I currently feel is gated, but it’s proving a pain so close to release. Best guess right now is two ship packs 1-2 pilots.

“Enough of the gripes about how much the damn thing costs and tell us about the actual game”, the imagined voices holler. To which I say, “shut your noise hole and try a brownie. While your mouth is full, I’ll tell you.”. The voices agree, and I move on.

The game starts with a grumpy alien vulture kidnapping the team’s peculiarly named leader (just as Starfox and pals arrive in the area). Apparently they’re the Legion and they’re bad, so they’ve decided they need leader guy more than we do. With our ships disabled, we’re helpless to fight back and badly named vulture makes off with our heroic motivation. 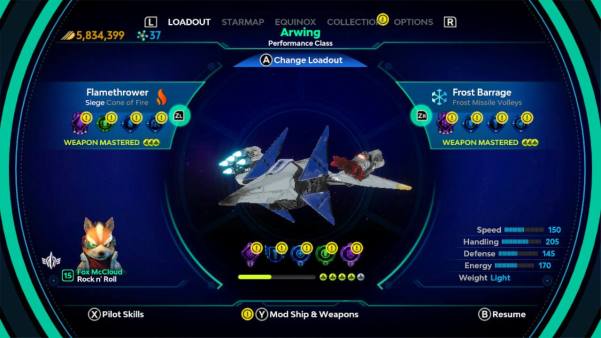 Next thing you know, you’re down on a planet, learning to fly around, plucking fruit, scanning fauna, helping out the locals, mining currency, blowing up the Legion forces, looking for plot clues, and planning epic revenge.

Play went something like: do all listed tasks on planet, upgrade some stuff, head to space, attack a few random space pirate bases, head to next planet, start again, go back to space, plot happens, go to next planet, find all my weapons are made of fail against these enemies but do my best (standard enemies taking nearly 3 times longer to beat, not due to their skills, but because they’re bullet-sponges), encounter a jumping puzzle.

If you think jumping puzzles in FPS games are bad, try it in a hovering ship that will just slide all over the tiny ass platforms. It’s absolute garbage and whoever, thought it should go in needs an Arwing, with the wings on backwards, shoved right up their nose for their crimes. True, it was 1am when I got to this bit, but hovering ship-based jumping puzzles can get in the freaking bin! Worst part was that the first time I made it to the top, I couldn’t finish the puzzle as I hadn’t noticed that I needed to cut free the final platform from the ground first. This really doesn’t help that before this I was already starting to feel that the game was getting a little repetitive. This just made me swear at the screen and go to bed.

I’ve got past it now, only to be rewarded with a well done that implied that it took me ages, it did, but heck you and the modular ship you flew in on.

Overall the game is fun-ish, graphically very pretty, nice to listen to (really digging the Starfox theme when you call for support), good to explore, ship design is interesting, and the plot isn’t too awful.

One thought on “Starlink: Battle For Fat Cash”