Some years ago I read an article about the greatest PlayStation 2 games that nobody bought. I had most of the games on that list and figured that it would be worth seeing what else might work for me that hadn’t worked for most. The first one I picked up was an odd little title called We ♥ Katamari. It was bright and colourful, it had a very strange intro with a really catchy theme, and I was absolutely in love. I do, in fact, ♥ Katamari.

Over the years I’ve managed to miss every other Katamari game, either because they’re hard to get hold of, on systems I couldn’t afford for only one game, or just sounded like really bad versions (I’m looking at you, mobile ports). As such, it was with a certain degree of squeeing, flapping and excitedly running around that I learned that the original, Katamari Damacy, was coming to my beloved Switch, as a glorious remaster. Since I first got my Switch, I’ve been saying we need to put a Katamari game on there. I was right, It’s a great fit and I’m so happy it’s happened (it’s also on PC, but my PC broke and I can’t afford to replace it).

You take on the role (ha!) of the prince. Your father, The King Of All Cosmos has broken everything in the heavens, leaving only the earth (and I guess the sun). Consequently, you are charged with heading down to earth to roll up whatever you can, to make new stars, constellations, and a new moon. You do this by rolling a colourful, lumpy ball around. Things smaller than the katamari will stick to it, while larger things will bash you away or just stop you altogether. The larger your ball of stuff gets, the larger the stuff you can grab gets.

Early levels will see you rolling up small items around a small room. Later on, you’ll be moving from small enough to roll under a car, with plenty of head room; to a gargantuan ball of terror that gathers even the tallest buildings. Most of the time, you’ll be given a target size and a time limit to aim for. Some levels however, will have special conditions. Maybe, you have to catch as many crabs as possible; maybe you have to carefully roll up things that aren’t cows, to get big enough to get the largest possible cow, to please the king (this level can get in the sea); maybe you’re trying to guess when your katamari hits a specific size, without your normal gauge. 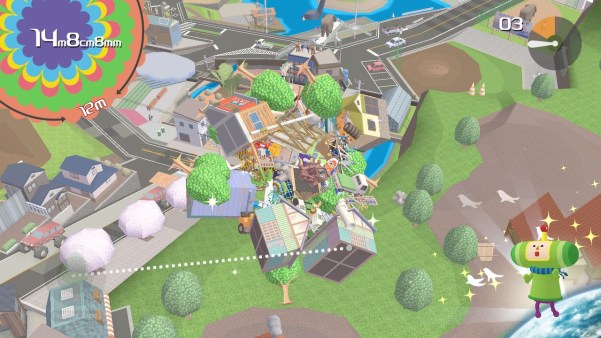 Movement is done through tank controls. Both sticks in the same direction to move that way; one forward, one back for fast turning; speedy, alternate waggling of sticks to get a speed boost. Well, that’s true for normal controls. You can also use motion controls, but oh heckins I cannot recommend that at all. It feels clunky, unwieldy and like you’re going to run out of time before you master it.

The music in Katamari Damacy Reroll is typically cheery, fun, and not a little silly. It’s in all sorts of style from jazzy numbers, to mambo, to acapella that even in a 15 minute plus levels it doesn’t get boring or annoying. 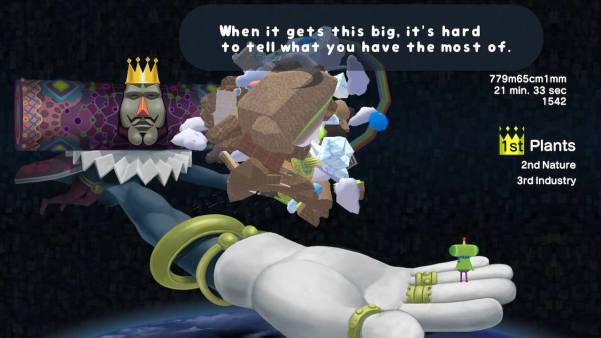 It’s a really odd concept, but it really works and is a huge amount of fun. While I completed every level of the game in one afternoon, I’m still going back and trying to get better scores on the levels. Larger stars will replace the old ones, smaller ones are destroyed for stardust, just making the sky more twinkly. My sky will be full of stars and stardust and I’m looking forward to playing a huge amount more. *begins plotting campaign to get more Katamari games on Switch*