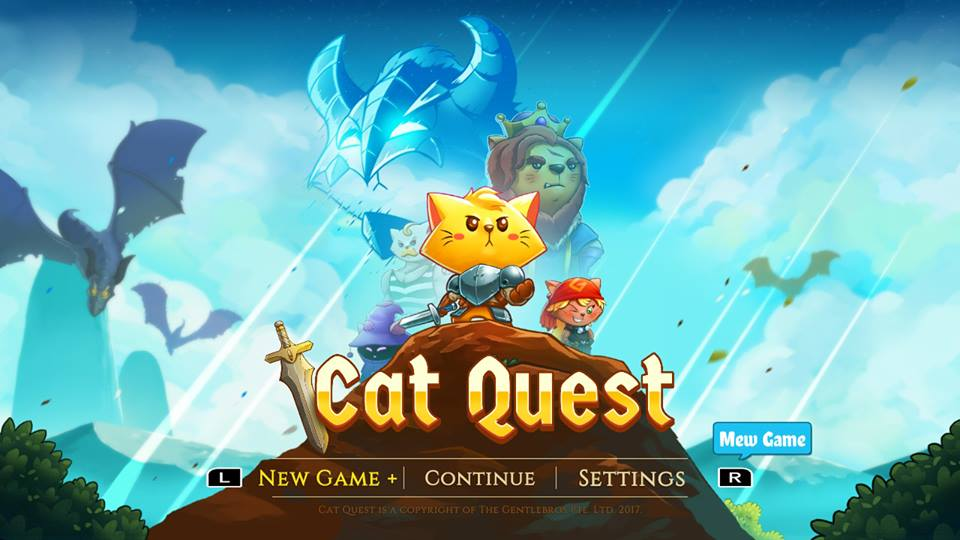 A Strong Dose Of Skoompurr 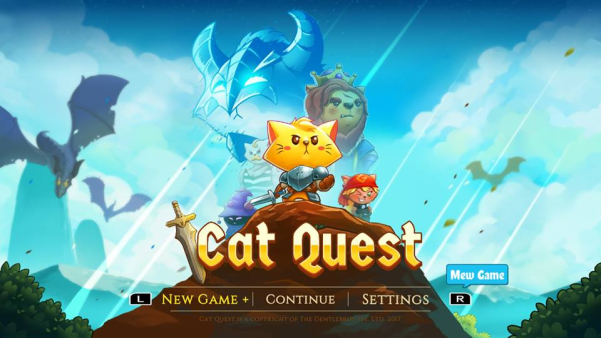 This week I finally gave in to the cute graphics and pointy eared chests that have attracted me at a couple of expos in the last year. And so, money spent, I hung out to the sound of cute mewing and slashing swords, in The Gentlebros’ action RPG, Cat Quest on Nintendo Switch.

As a cat-starved cat lady, it seems perfect for me. You take the role of a brave cat who’s sister is kidnapped by a sinister looking white cat in some really snazzy headgear called Drakoth. Before I knew it, they’d blasted my tiny boat and left me adrift on a chunk of wood that genuinely didn’t have room for both me and Leo DiCatprio.

Next thing I knew, I was washed up on the shores of Felingard with Navi-wannabe, Spirry. Spirry the spirit guardian (real thoughtful there bros gentle) who is giving orders and instructing me how to grow my power and work towards saving my sister. My main complaint about this glowing guide, is that they continually refer to townsfolk as ‘peasants’. Well fuck you, you classist, twinkly bastard!

It’s quickly revealed that I bare the mark of the Dragonblood, the dragon slayers of long past. I’m not ashamed to admit that this had me immediately meowing the Skyrim theme and desperately trying to come up with related puns (Fus Ro Purr! I used to be an adventurer like you. Then I wubbed the belleh. Play along at home, if you like).

Soon enough the game opens up into a large, beautifully drawn, open world inhabited by a number of strange creatures. There’s some brown sheep things that hop around fairly harmlessly, bandit kitties, large floating fists, weird floating scorpion-tailed penis creatures, and a selection of dragons great and small to swipe your weapons at or cast powerful magics upon.

Throughout the world are a number of caves or ruins which can be investigated for experience, gold, and funky loot. Each of these areas is fairly short which is good for on the go/on the toilet play. Before entering, there is an opportunity to check the level against your own so you can tell how likely it is that you might be destroyed in a single hit. Loot comes in chests with adorable cat ears (that make me squee every time I see them, because I am kitty trash.) and could be weapons or armour. There’s plenty of fashionable hats and armour to collect and level up throughout your adventure. Items are levelled when you come across duplicates, meaning that you won’t necessarily have to change from your favourite wizard hat, it can grow with you. 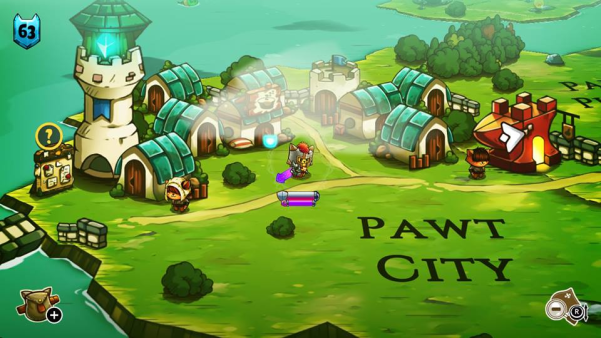 In addition to the swords, maces, and knobbly staves that you’ll find, there’s a number of wizard towers dotted around the map where you can gain new magic spells and upgrade them. While there’s a good selection, to be gained, I spent most of the time just using the first spell. This Flame Purr creates a circle of fire damage around you in a good radius and never stops being useful as it also does decent damage over time. The other one of note is the freeze spell, which slows your enemy. Perfect for taking down the more mighty dragons with ease. You’ll encounter others including: lightning strikes, spike floors, and one of the most pathetic healing spells I’ve ever encountered in gaming.

As you travel across the land (searching far and wide. Da Da. Da-Dum.) you’ll come across towns and villages. Here you can chat to the locals for news, check the notice board for quests, or fall flat on your face in front of an inn, in order to rest up and save your progress. I’m not kidding, pressing the action button in front of the inn will see you just crash out harder than me after four pints of scrumpy on an empty stomach. Something that, like the adorable chests, never ceased to entertain me.

Once you’re all done with the main quest, you can go back through on new game + – which strips some of your plot-based powers, but leaves your sweet loot intact, or try mew game. Mew game mode lets you add meow-difiers, like forcing you to stay at level one, having only nine lives, or forcing you to play without armour. While I’m sure this would add something if you felt the game was short and too easy, I finished my initial run feeling like I’d had my fill of this catventure.

The soundtrack is a cheery and bouncy adventuring tune above ground and somewhat darker in the caves and ruins, but nothing really to write home about. I didn’t get annoyed with it, but it did tune out after a while.

Overall the game is basic, purrfect for short bursts of play, endearing, beautifully drawn, and suitably full of cat puns.

Classist companion
Rather short unless you want to keep cycling through.
Twice the price on Switch that it is on mobile.