Overgrowth is a third-person action game by Wolfire Games and is available now. In this sequel to similarly styled 2005 game Lugaru – by the same developer – you play Turner, an anthropomorphic rabbit with some pretty sweet fighting moves. The game takes place in a pre-industrial world, populated by anthro rabbits, rats, dogs, wolves, and cats.

I’ll be honest up-front and say that I got a review copy so it’s bound to have swayed me to add a point to the final score (It’s 2/10. There, I saved you the pain of what happens next). With that in mind, here goes.

Overgrowth began development in 2008 and was released on Steam Early Access in 2013. January 2017 saw the game’s official update to beta, before the bunny burst into a full release 16 October the same year. There’s been a good amount of playtesting done by the community and I’ve seen videos of the game running well on YouTube, so it can be made to run well, it did not manage that on my system. Instead it coughed, wheezed and waddled along like an elderly asthmatic badger. As such, it somewhat killed my interest very early on. Still, I can only review what I experience. Curiously I found that changing the graphics settings did nothing to the speed it ran at, but did make the graphics a little more attractive and detailed. Woo, shiny garbage! 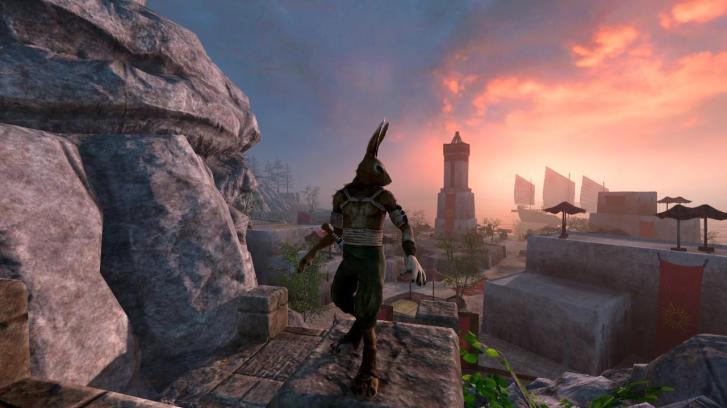 Visually Overgrowth looks all of it’s 9 years, and not in a good way. Despite heavy grass cover of some of the more pastoral sections, the world does feel rather empty. Townships feel lifeless, bar a few bits of foliage, some stacked boxes, and – for some reason – rugs in the streets. “Gosh, this town of endlessly repeating cobblestone texture is looking a bit bland. I wonder what I can do to spice it up? Ah, fuck it. I’ll just shove down a few rugs, it worked in the living room, right.” Bless the dev, I know I couldn’t make anything even remotely this good, or good looking, but I’m not the one selling this game. 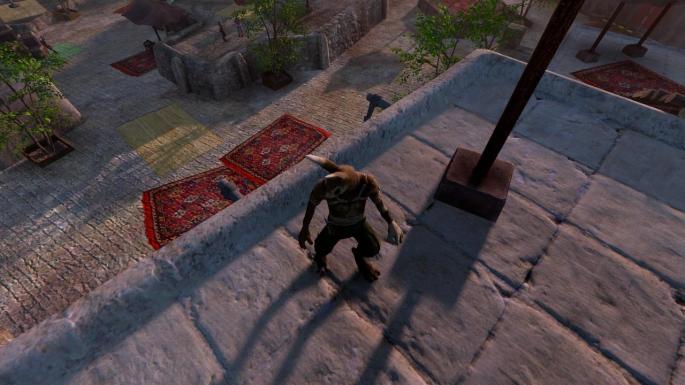 The screen is usually found uncluttered by things like useful information of any sort. Turner’s health is best determined by how smeared with ketchup they look at any moment. Only the occasional button prompt near the beginning advising of the controls and some minor tips upon your death. These are presented in fairly plain white text that feel a little place-holdery. Considering the amount of time spent on this game, it’s a shame that there are these presentation hiccups that leave a sour taste in the mouth.

According to the product description, Turner is a lightning-fast acrobatic ninja rabbit. According to me, they’re a wobbly rag-doll that falls to a pathetic physics heap on contact with enemies and is prone to sliding for hundreds of feet if not impeded by a handy building or rock. Choose to go in all… er… feet blazing, or stealthily sneak up to your enemies, choke them out and deposit them off the edge of a nearby cliff.

There may be no loading time if you die and need to restart a section, but there are some fairly extensive loads between levels that do rather drag on in the early sections of the game. Here’s a village, kill that bunny and mayyyyybe that bun over there. LOADING TIME (one last call for alcohol…), plot, plot, plot, kill 2 enemies, MOAR LOADING, “look yonder, a random structure with a fire and some boxes nearby”, you may now kill 5 enemies, “one order of loading, extra plot, hold the mushrooms”, next up jumping puzzle. Stop it. I can only get so moist. No seriously, the excitement is just too much. Help me, I’m drowning in my own knickers.

Controls are ok. I went with my 360 pad for this review as I just prefer third-person games with a pad. For some reason most of the controls are on the shoulder buttons/triggers. Attacks on right trigger, right bumper to jump, and the left side for grapple and roll. Sadly, the game only offers partial controller support, so you can pause but you’ll need the mouse to navigate menus.

Now fine, Turner is a rabbit, so sure, they jump high. I get you. However, the physics are comedic in their low gravity nature. It’s not quite Goat Simulator, but it often feels like your character is one heavy gym session away from getting aggy at a passing sparrow and just headbutting it (stay tuned for the third instalment in this series where a steroid-fuelled Turner leaps out of the atmosphere and freezes to death in the void due to an argument with a pigeon, expected 2045). I perhaps spent more time that necessary performing kicks and somersaults off of flights of stairs, while still getting a safe landing. At which point, it was more like Tony Hawk’s Pro Skater 1 + parkour + furries, and actually, I feel like that would have been a better game. There was also fun to be had carrying fallen enemies to the nearest cliff and kicking them off. Pro tip there, if you ever end up getting this accidentally in a bundle and figure you’ll try it out anyway, one very bored Thursday lunchtime when you’re off sick with a cold (*cough cough* comedown *cough*).

There’s community mods apparently, and I think it’s telling that the one I see advertised most is for optimising the grass and promising to restore a minimum of 15fps *audience make a collective “oooooooooOOOOOHH”*.

There you go, I can’t bare to think game about this anymore.

Available from the Humble Store.

One thought on “Myxomatosis Rex – Overgrowth”