Spooky Action At A Distance – Man Of Medan

I used to watch a lot of horror films, not sure what happened, perhaps I just caught a lot of really bad ones in a row. Regardless, I’ve not had time for horror much of late. Gore doesn’t really do it for me. I’m not averse to it, I just don’t think that it makes a movie better. I like a creeping sense of dread. The idea that this horrifying thing is becoming more than 90 minutes in the dark with popcorn. Something that gets into your mind and gives you a moment’s pause in the dark, when you’re alone.

Some time early this year I finally got a chance to play Until Dawn with my fiancée. We shared time on the controller and made any decisions, that didn’t require split second timing, between us. It was a nice couple of evenings sharing moments of panic through quick time events, moments of surprise, and the all important moments of quiet in between, to build the tension. This was good horror.

Around the same time, The Dark Pictures Anthology: Man Of Medan was announced from the same studio as Until Dawn. The plan was to take all the photorealistic character styling, decision making, quick time events, and exploration of the original game and create an anthology series of slightly shorter stories that can be played solo or with others in a number of different ways.

First up, there’s standard solo play. See all the things, from your currently controlled character’s perspective, explore, decide, try to keep everyone alive while you unravel the mystery of the decaying military vessel where most of the game takes place. 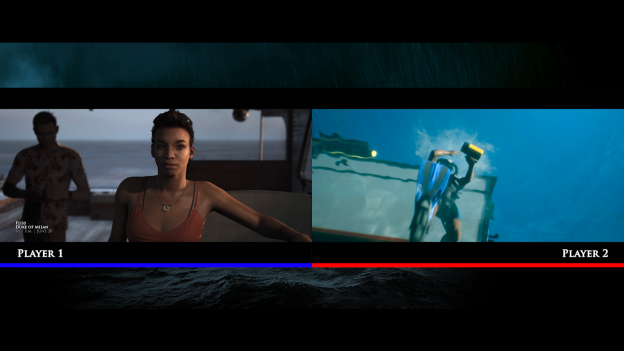 Next there’s couch co-op. Choose your number of players, and which characters each person will play as. As you move through the story you’ll get messages between scenes telling you who should be on the controller for the next section. Where as in Until Dawn, we made pretty much all decisions relating to the protagonists together, here we played our own characters, to our own tastes. Something very much encouraged by having the characters divided among us.

There are sections of the game which happen simultaneously. As such, one player can be talking to another character in one area, while another person is exploring another section of the ship. Consequently you can have a moment very near the beginning of the game where two groups of characters are having entirely different stories told.

Those below the waves are finding interesting artifacts and trying to understand how a plane came down. Meanwhile above, a group of pirates are harassing those on the boat, eventually leading to an explosion, which the others see from underwater. This, in turn leading to WTF moments from the divers, which the characters can decide to discuss, or not. It’s up to the players to decide if they’ll share that information with each other or keep all explanation within the game itself. There’s a few other moments where this is used really well, but I won’t spoil you on it. Suffice to say that playing solo or in movie night (couch co-op) mode, the game takes around 5 hours to complete. Whereas online co-op is closer to 3 because of the overlapping sections.

The basic plot of the game sees two brothers, Alex (kind of a jock) and Bradley (an adorable, shy, nerdy type) preparing to take Julia (whom Alex is dating and seems like the type to ask to speak to your manager), and her brother Conrad (goofy alcoholic rich boy who seems like a total liability) out for some diving around a crashed plane they have located. This is a previously unexplored wreck and there’s excitement about what they’ll find, and in what condition. The last member of our merry band is Fliss, the boat captain (absolute badass, if a little shady) who’ll be taking them out on the ocean.

Things start off pretty gently through a flashback featuring a couple of naval soldiers on shore leave. The game uses this time to gently introduce the controls and game mechanics in a no-stakes environment. Flash forward then, to the present and we see our main cast loading their boat up for the proposed dive. Before long though, it’s all diving to the crashed plane, hearing rumors of lost gold, the aforementioned pirates showing up and dragging everyone off to and older and decaying, but still familiar ship. All aboard is very quiet and our protagonists are in over their heads. And that… is all I’m saying. You’ll have to play it for yourself if you want plot. Suffice to say, I enjoyed it a lot, on multiple playthroughs.

Just like Until Dawn, characters can die and this will very much change how the remaining characters interact and what options they have going forward. This gives the game a lot of replayability. Do you want a horror film with a lone survivor of the group? Do you want to try and save everyone? Maybe “accidently” fail a few quick time events to off that one character you don’t like? The options are all there. 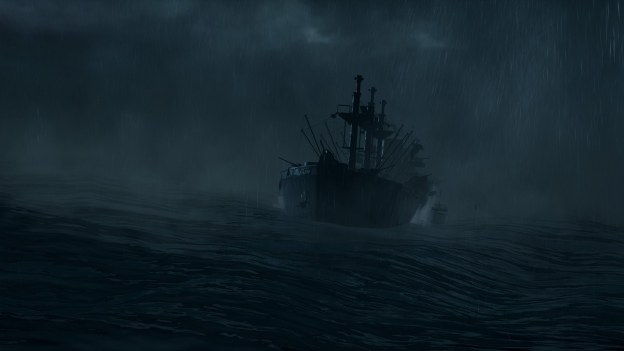 The sound design and music is spot on. With great effects and cues that are well used, to enrich the experience. Graphically, the game is on par with Until Dawn. Which is to say, beautifully rendered and animated character with really uncanny teeth (why do all of these games do that?). The lighting is great and the locations are wonderfully grimey in just the right way. That said, I did experience some minor slow down in a few areas and a couple of momentary glitches, though this may be patched by the time of release.

One thing I was really happy to see was the number of accessibility options. I have a number of sensory processing issues which can make a game like this frustratingly difficult at best and unplayable at worst. First up, you have the ability to remove time limits from QTE button prompts. As long as you hit the correct button, you won’t fail. Additionally, there’s the option to replace button mashing sections with just holding the button down. Next up, there’s options to change how subtitles appear. Do you want the subtitles on a background rather than just overlayed straight onto the action? Do you want to change the colours for a more manageable contrast? Those options are here for you. Lastly, there’s the sidebar, which will put text from the various documents you find lying around into a more legible format, in a pop-up sidebar. These are all great considerations that I hope to see making their way to other games of this type in future.

The Dark Pictures Anthology has the potential to be to the interactive horror genre, what Telltale Games were to, well, all the many many genres things they worked on (though hopefully, it won’t end up collapsing like an incorrectly assembled deck chair as TTG did).