If Wikipedia is to be believed, Sumerian and Akkadian mythology says that ‘abzu was the name for fresh water from underground aquifers which was given a religious fertilising quality… sources of fresh water were thought to draw their water from the abzu. In this respect, in Sumerian and Akkadian mythology it referred to the primeval sea below the void space of the underworld (Kur) and the earth (Ma) above.’

On the other hand Abzû is a diving simulator with some lite puzzling. Released in 2016 by Giant Squid Studios on PS4, XBOne, and Windows PC. It’s now made its way to the Switch. You start your underwater adventure hanging in the ocean, just below the surface of the water. Blinking awake and then surfacing, you can see nothing but calm sea in all directions. Prompts will pop up to teach you to dive, boost, interact, and ride the larger fish and that’s the end of your direction in this. Right, let’s go see what’s happening in this oceanic realm. 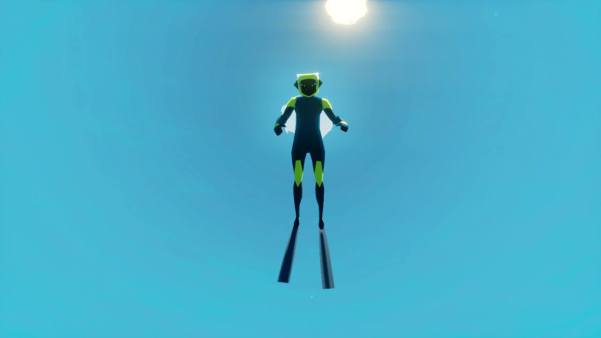 This game never explains itself. Some games, like Journey, can get away with this, using glyphs, cutscenes, and the world itself as a storytelling tool. While Abzû does feature the odd mural here and there, I can’t say I managed to glean as much from it as I did reading the Wikipedia entry for abzu.

Exploration is basically, this thing has an orange bit over it that suggests I can interact with it, let’s see… Oh, turtles flew out of this circle of coral, somehow. That’s, good(?). What’s that statue down there? Huh, seems I can meditate there and follow a fish around for a while. Pushing the left stick will switch which species you’re stalking with your mind. How very tranquil. Or creepy, depending on how you feel about following unsuspecting underwater fauna.

Oh, now there’s a shard of light illuminating this area where there’s a something in the sand. *poke poke* Oh, I guess it’s some kind of, drone… thing, that is now following me (this is what I hath wrought with my fish following. How quickly moves the tides of karma in this deep, uncaring ocean. *gurgle screams as camera pans out*). Well, I seem to have three of them now. Yay(?). Ah, they’re cutting through that coral wall for me, thank you metal drone friends. Onwards!

Occasionally, you’ll leave a large open area – losing your primary movement controls – to be ferried down a nicely decorated tunnel, moved by the ocean currents. During these sections you can move around and bump into certain schools of fish will cause them to glow (have I learned nothing from stalking them, leave the fish alone!). There seems to be no benefit to doing this so I remain mildly bewildered by this whole aspect.

As you progress, you will encounter strange underwater buildings, with swirling voids on their roofs. Swimming into these takes you to a weird void ocean, that appears to be hanging over another body of water. Is this the Kur that Wikipedia mentioned? Buggered if I know. 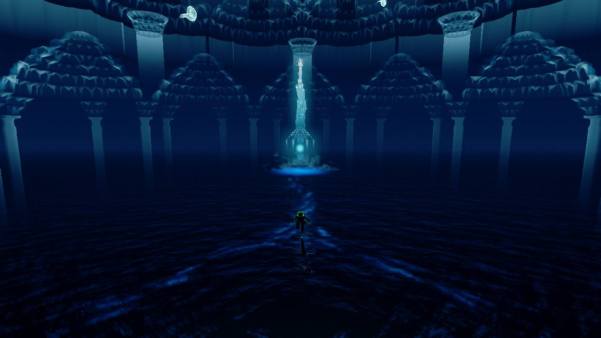 You then swim towards a structure ahead of you and pull some glowing ball out of your chest and pop it inside a slightly bigger glowing, wobbly ball in the structure. This takes you back to the outside of the structure you swam into the top of earlier. The area will start teaming with life, some milky blue water will flow into the bottom of the area (how does that even work?), and a door will open. You still following?

Moving on you’ll find three more of these and a couple of areas where you need to turn a thing to make a chain move, to open a door. It’s barely a puzzle, really just basic exploration stuff.

Towards the end of the game, you encounter all these pyramids, point down, that will electrocute you if you get too close. Not to worry, you won’t die, it’s just annoying to try and get past. This is one of the few sections where I actually struggled with the controls. Positioning your very mobile character in a small space, wrangling the camera and making sure you accelerate at just the right angle and for not too long.

I won’t spoil too much, but there’s a whole bit with a resurrected(?) shark and killing off some alien(?) pyramid ships to make oceanic life grow all over their broken hulks and then it’s time to roll credits. After which, you’re free to seek out an online community to ask about what the ballsington fuckly just happened.

I’ll not deny that Abzû is very pretty. Having mentioned Journey earlier, it’s very much in that art style, just more blue than orange. It’s quite relaxing to swim through the large open areas, turning elegantly and in the water, boosting through underwater archways, leading schools of fish in an aquatic conga line.

The flora and fauna are nicely designed and the texturing is bold and minimal. There’s a whole section with a whale at one point that I think was supposed to be magical, but I just kept thinking about how angular it was in some places. Apart from that, I just found it all really gorgeous, especially some of the larger sea plants and coral formations.

The music is a very tranquil classically composed affair and while I hate to keep referring back to it, It’s very reminiscent of Journey. This includes the swells as you move into the ocean current sections that mirror the sliding down hill sections from that PS3 adventure. What’s that? It was composed by Austin Wintory, composer of the Journey soundtrack. Well, there you have it. I really enjoyed the soundtrack and would definitely recommend giving it a listen if you like classical music, even if you don’t play the game itself. 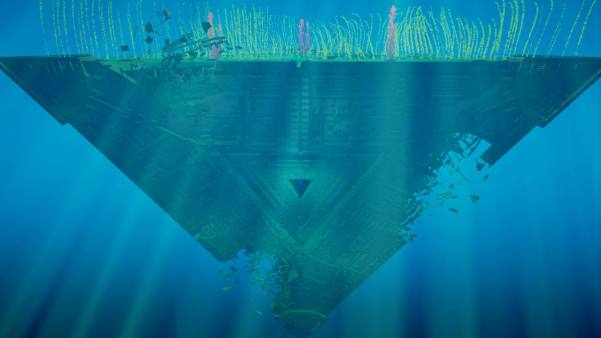 And just like that. It’s over in about an hour, plus change, perhaps more if you spent more time just swimming around for fun.