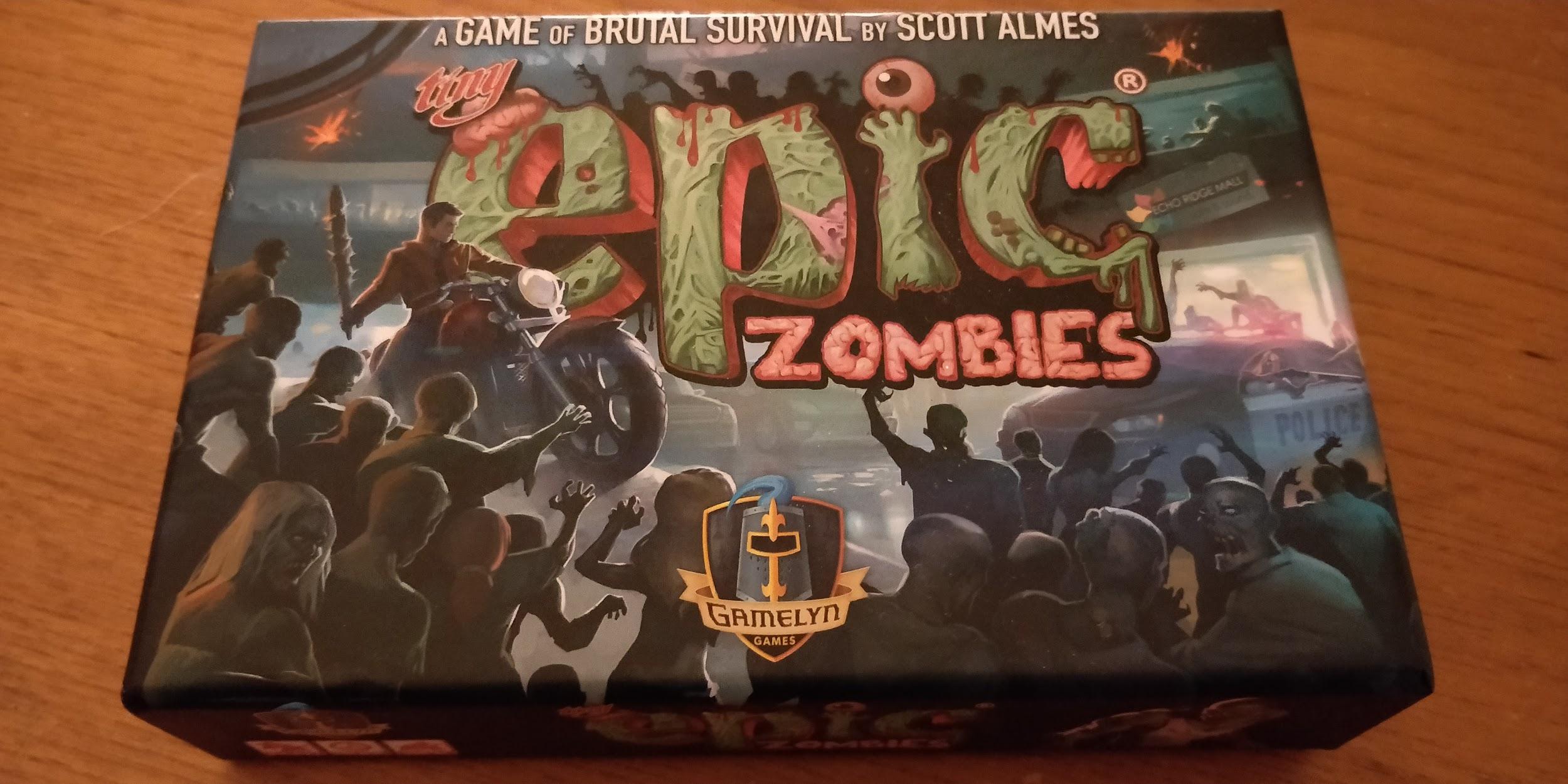 Do You Want Anything From The Shop?

I went on a bit of a Kickstarter spree in the nine months from September last year. I backed a bunch of boardgames. So far, they’ve all come through and been pretty darn good. Last week I got the latest one delivered. The small but mighty, Tiny Epic Zombies.

The game comes in a box not much bigger than the average novel, but contains a huge amount of stuff. Firstly, there’s the nine mall cards. The eight stores are laid out at random around a central courtyard. Once the board is laid out, you can move on to picking the three objectives for the game from the 9 each available for co-operative or competitive modes. Between the randomised nature of the stores and the variety of objectives, there’s a lot of replayablity with this game.

Each of the objectives will include their own setup instructions with extra tokens being placed out, or markers placed on the objectives themselves, to monitor progress. Objectives could be anything from tracking down the true source of the zombie outbreak to building a weapon and ammo cache by scavenging the mall stores.

There’s options to play cooperatively with 1-4 players against an AI zombie force, or else 2-4 players can go up against a human controlled enemy.

Each player is dealt 3 characters and picks one to represent them in the world. Different characters having their own unique skills which offer an advantage against the horde.

A zombie is selected or chooses who they’ll play as. These zombies can be found on the back of the character cards and are the decomposing versions of those heroes. For the AI versions, only the passive skills are used. However, for a human controlled horde, there are a range of increasingly powerful skills available. 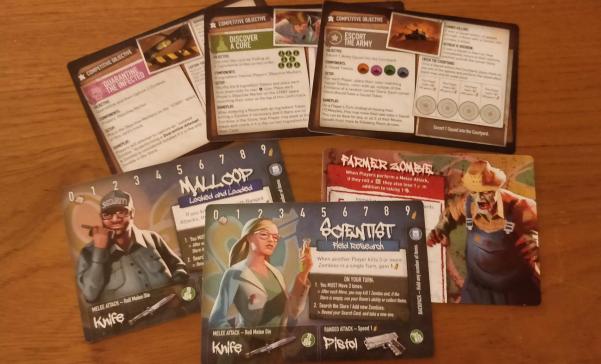 Gameplay consists of players moving three spaces through the mall and carrying out any number of actions as they do so. This could involve performing melee attacks on zombies in the same room, ranged attacks on zombies in adjacent rooms, collecting items from stores – once they’ve been cleared out, etc.

At the end of each turn, players perform a search by turning over their scavenge card. If the icon on the card matches the store, this will give the zombies an advantage. Once revealed, these scavenged items can be collected by the next player to visit the store, after it’s clear.

For the zombie player, they’re trying to attack the central court of the mall, break down the barricades and kill any survivors they find there. They can also kill the player characters, which will deplete the survivor count from the central courtyard.

The health and ammo mechanic in this game is unlike anything I’ve encountered before. Basically you start in good health and with 9 bullets for your ranged weapon. Ranged attacks (and some of the player character abilities) will deplete ammo. Zombie player abilities and poor melee attacks by the players can cause them to receive wounds. However, the health and ammo meter are on the same track. Should the two meet, or overtake each other, that player is dead. Either due to their wounds or because they were too badly equipped to survive. If there are survivors left in the courtyard, that player can take another player card and start again. Their old character dropping all their weapons and items in the store they’re standing for anyone else to collect.

One of the first things that really drew me to the game on Kickstarter was the ITEMeeple. These are fairly standard shaped meeple – maybe a little larger than average – but with little holes at their hands. One of the unique things about this game is that the weapons you scavenge around the mall can be equipped to your meeple. Adorable knives, swords, Uzis, mp5s, etc can be attached to your avatar as you wander around the mall. There’s also the vehicles that can be used. Either a motorcycle or a police car. You really haven’t lived until you’re riding a cute little motorcycle through a mall while brandishing a dinky chainsaw and rocket launcher.