I’ll get to the game in a second, but first off I have to address something incredibly important about Lords of Waterdeep. The box is hugely satisfying. Everything has a place. Things not only fit there, but can be retrieved easily. This is easy to get out, helpful during play and a joy to pack away in a way that I don’t think I’ve ever found with any other game. It’s an impressive feat to make even the cleanup a joy.

Lords of Waterdeep a worker-placement game for 2-5 players, and plays in about an hour. It’s set in the Forgotten Realms universe, which you may know from Dungeons & Dragons. This is a city of intrigue where Lords hatch plots for political power, manipulating the citizenry with hidden strings.

I enjoy worker-placement games immensely, and LoW takes that formula and expands it in a really interesting way. At the start of the game, there are basic locations you can visit to gain money or intrigue, acquire details of quests, hire adventurers to meet in a tavern to send on those quests, and build new locations to expand the city. 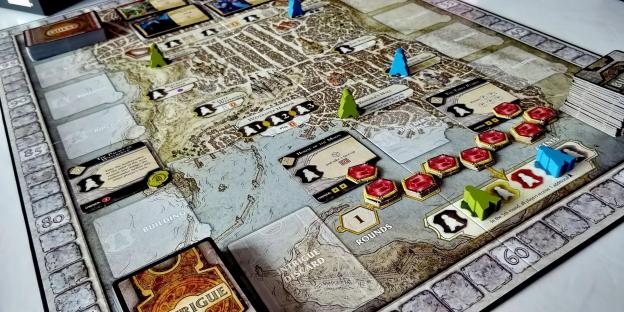 New buildings are given the mark of the player who purchased them and each will grant them a benefit when the building is used by anyone (including themselves). This can create dilemmas for other players. They want to gain a bunch of wizards for a particular quest, but doing so will aid you in completing parties for your own quests.

Once you’ve recruited enough of the right types of adventurer, you can send them off and complete your quests. This could have simply a victory point benefit, an ongoing benefit, or it could be one of the two types of quest that your secretive Lord gains a benefit for at the end of the game.

If you send a representative to the harbour, you can play an intrigue card from your hand. These may grant you extra adventurers or some coin to grease the wheels of your various schemes. Many of these will not only benefit you, but also your fellow players (though there may be a cost to those that want to ride your coattails).

The game is played over eight rounds. At the fifth round everyone gets an additional meeple to play during future turns. By this time there will be enough new buildings that they have space to be placed. It’s all very well balanced. Once the final round is over, you add your Lord’s bonus points for completed quests to your total victory points and declare a victor (and then you pack it away and the box itself brings you further joy. Or maybe that last bit is just me).

This game is beautifully finished. The board is nicely illustrated (if a little lacking in colour), but in such a way as to still be very clear about key information. The cards are printed on really nice stock, all the art, from the box to the manual, to the cards is not only lovely, but consistent. The cubes are a nice size and weight, the money is heavy card stock, and the meeples are a good size and very pleasant colours. For a game this reasonably priced, it’s a top quality product.

One thought on “A Deeply Satisfying Box – Lords of Waterdeep”