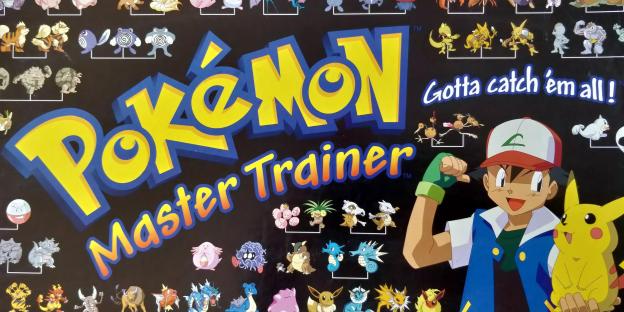 Do you want to be the very best? Like no one ever was? Can you afford £70+ for a second hand game in ok at best condition? Congratulations, you can be a Pokémon Master Trainer.

Look on eBay and you’ll see boxes for this game, player pieces, blocks of coloured discs, even manuals. To find a complete one, you’ll probably be looking at handing over some serious cash (unless you get incredibly lucky and someone with no clue is selling it on Buy It Now for a super low fee or with a typo in the description). Is it worth it though?

My first encounter with Master Trainer was when I attended CoxCon last year and my fiancee was invited to play with a group (brave of the owner to bring this expensive, vintage item to a con and let drunken attendees have at it). It’s a very large board, with lots of little divots for coloured discs. These represent various Pokémon you encounter along various routes as you travel across the land (searching far and wide). Roll dice, move to a space, encounter Pokémon, fight Pokémon. If you win, they join your team and add their power (that’s inside) to yours. If you lose, they stay face-up on the board for the next trainer to try and enslave.

The further your journey takes you, the stronger or more evolved the ‘mons you encounter will be (there’s even a chance to gain Kanto region legendaries and Mewtwo). Get far enough around the board (and if your team is powerful enough) and you can take on the Elite Four and claim ultimate victory. 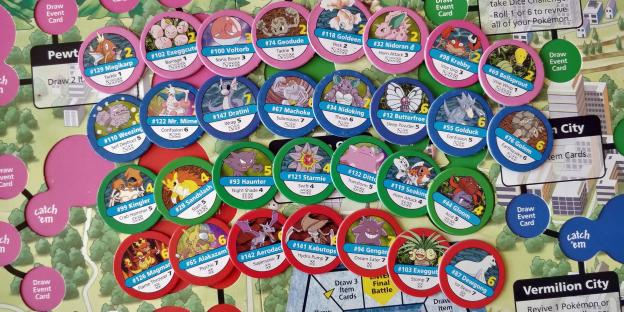 The game they played at CoxCon took *hours*, some players even gave up and went to bed before they were done. While a lot of this was undoubtedly general cheer and chatting causing delays, it struck me that this must be a pretty decently weighty and they were having an amazing time, which was lovely to see.

Earlier this year, in a bout of crippling anxiety and paranoia, I bought a copy of Master Trainer as a gift for my fiancée. While writing in the manual suggested it wasn’t complete, we counted every single piece and realised someone must have bought enough spares to finish it to resell (and friends, they did well for having done so).

Setup is pretty quick, place Pokémon discs randomly, face-down in colour matched divots, place player markers on the start position, and roll some dice. It’s a really straight forward game (after all, it is aimed at kids) that bursts with nostalgia and… well just nostalgia. It’s the original 151, the best ones *(Psy)ducks to hide from the baying crowd, angry that I don’t prefer Gen 3* Sorry, not sorry. Bulbasaur is the best!!!

My only real problem with it is that if you’ve played it before, you have a massive advantage. You know when your power is about right and when to take the risk and move to end the game. Because the final battle is decided by dice roll. No modifications. No strategy. If you have enough power to get to the Elite Four, you chance it and hope for the best. And that’s the real reason it took them hours to finish the game (apart from the fact everyone was stealing legendaries off of each other like they’d joined Team Rocket while their opponent was at the bar).

So who is this game for now? Collectors – sure. 90’s kids with strong nostalgia and a lot of cash – definitely. Drunk 90’s kids at a games and YouTuber convention – fuck yeah! People with a casual interest in Pokémon – probably not. Modern board gamers with no previous history of the game – heeeeeeeell no! Am I unhappy that I bought it as a gift – No.