In my ongoing quest for games of weight and substance I’ve recently succumbed to the choking soot of Brass Birmingham. Set between 1770 and 1870 Brass Birmingham sees you and one to three friends take on the roles of early industrialists in the Black Country.

During the first part of the game, players take turns to build canal routes and factories across the English midlands. Cards showing a location allow you to build industry there, while those showing a particular industry allow you to open up a city on your network (somewhere you’ve built connections to) to this wonderous new trade. 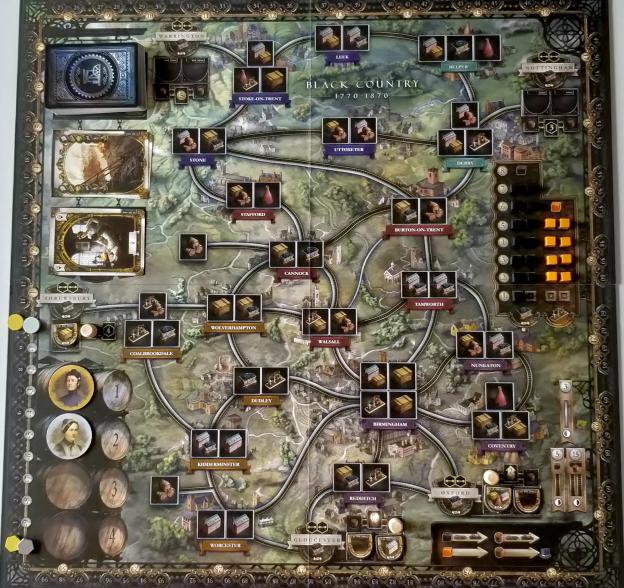 The game scales well with more players, having marked cards and tokens showing which are to be used depending on player numbers. The more players, the more the region opens up. Initially the map is bare, only a few markets open for trade of specific goods, usually with only one area willing to buy anything sent their way. Each town or city will be willing to be home to certain types of industry, meaning you can only make pottery there if there’s a space for that tile.

This part of England was named the Black Country due to the soot that covered the industry-heavy region (or the 10m thick seam of coal close to the surface) and Brass Birmingham is also powered by these little ebony cubes (I assume they mine it out in cubes, Wikipedia wasn’t clear on that, but it would make it easier to stack if it did, so I’m going to assume the game is fully accurate in its depiction). Coal will be almost as important as currency in the game, being required for a majority of industry buildings.

Speaking of which. Each player has a playmat, showing the types of industry they can build, with each type coming in multiple levels. Build all your level one textile factories, and you can move on to the next level. The strategy here comes from working out what will be worth the most points to you during the game’s two scoring sections. However, to sell goods such as pottery, textiles, and manufactured goods (they’re just ominous boxes, the kind you’d fill a warehouse with and then hide the ark of the covenant in. It’s entirely possible that an industrialist from Dudley is the one hiding the ark from nazis) you’ll need to be connected to a market via a chain of canals, as well as plenty of that great industrial lubricant: beer!

You want to sell that pottery, down in Oxford? Best have some beer about, perhaps available from the town itself, perhaps from an opponent’s brewery. It’s one thing to get things down on the board, but to really get anything out of them, you’ll need beer available, to get it to market. Because… reasons.

Hold up! “Opponent’s brewery”?! Yep, things you create, such as coal mines, iron foundries, and breweries create resources, these resources can be used by anyone on the same network. If you can trace a line from your factory to the market and a source of beer, you can use that beer to sell your goods. Good for you, but also good for the brewery owner (or mine/foundry owner). You see, once all of a resource on a tile runs out, it gets flipped and the owner immediately gains an income benefit and that tile gains value in the scoring next section.

Here’s where some strategizing comes in. Do you build that brewery as your second action on your turn, risking that your opponent will use it and leave you without the vital beer you need to sell your own wares? Or do you play it safe and build another canal? Biding your time until your next turn when you can brew beer and immediately sell your goods. Thereby causing a chain of flipped tiles as you use up your beer and sell off your goods (money, money, profit, textiles, industrialist swag, etc).

As mentioned earlier, the first part of the game is all about canals. However, the age of moving goods by water is fast approaching its end. Once the player deck has been run down, the age of canals comes to an end and those aquatic conveyances become nothing more than useless, flooded trenches full of shopping trolleys, used condoms, and middle class hippies living on barges with pretentious names (both the barges and the hippies). Furthermore any of your industry tiles that are only level one, are now as obsolete as minidiscs and have to be removed from the board along with all your carefully built canals.

This means that half way through the game, things can essentially reset. Especially if you haven’t managed to get any of the second level structures down. Suddenly the board is quiet again and you’ll have to build up from scratch, with shining railways now connecting each centre of industry. Those trains will need more coal so you’d better make sure there’s a good supply nearby, or you’ll have to buy from the market.

Besides certain locations on the borders of the map being markets for various types of goods, there’s also the coal market. By building a link to the coal market, you can buy and sell coal. Should you need some of these blessed black cubes, but find none on the board, you can buy from the market. As the market empties out, the cost rises to meet demand. However, should someone build a coal mine which is connected to the market, when there is such demand, they sell their coal on. This immediately earns them money at the going rate, and brings them closer to flipping the coal mine and getting some sweet sweet scoring benefits.

Our first game of Brass Birmingham ran to about 2 hours (plus 30 mins of watching a YouTube tutorial), but subsequent games have been closer to 90 mins. While there’s a lot of options for what to do on your turn, the game can move pretty swiftly. It’s only when you get down to the last few cards of the era that decisions can get really tough and you really need to think hard about not only what is best to do, but what can be done with limited options.

Overall the game is really interesting and a really fun puzzle to work through, but with no definitive answer, meaning that thanks to the random elements, there’s a lot of replayability.